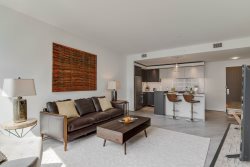 The Workhouse Arts Center in Lorton, VA, has a very unique history- it used to be a prison! It opened in 1910 as a workhouse for misdemeanants, people who had been charged with petty crimes. The Workhouse was entirely self-sufficient; its first prisoners even lived in tents and constructed the original wooden buildings! Gradually, it evolved into an agricultural camp with an orchard, fields, poultry and pigs, a sawmill, a dairy, a blacksmith, and more.

However, the rehabilitation programs slowly phased out towards the end of the 20th century, and the Workhouse became a medium-security prison, known for its over-crowding. The prison closed at the end of 2001 and its land sold to Fairfax County, which approved a plan to transform the prison into a cultural arts center. After several years of renovation and rehabilitation, the Lorton Workhouse Arts Center opened to the public in 2008.

Today, The Workhouse houses the galleries and studios of over 100 visual artists. Interaction with the artists is encouraged, enriching the experience for visitors, and the artists! The Workhouse also supports the performing arts, so you can come by for dance performances, film viewings and musical concerts. In addition, The Workhouse offers educational classes and workshops in mediums such as the culinary arts, drawing, ceramics, painting, theatre and textile design. Visit their website for full information on the classes offered.

The Workhouse is a revolutionary cultural center, with many opportunities to view and participate in cultural and artistic performances, classes, exhibits, lectures and more! A current exhibition, ‘Women Now,’ commemorates 100 years since women were incarcerated at the Lorton Workhouse prison for advocating for women’s right to vote. The exhibit features well-known and influential contemporary artists, as well as artists on the rise. While learning more about these female artists and their works, it is an opportune time to reflect on the last 100 years, and the upcoming 100 years. We cannot recommend a visit to this place enough.