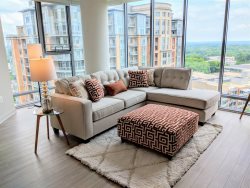 DC’s West End neighborhood is an oft-overlooked part of the city. Located adjacent to such formidable, well-known districts as Georgetown, Dupont, Foggy Bottom, and Downtown, it’s no surprise West End has remained largely off the radar. However, in recent years, this tiny triangle of the city has seen a well-deserved resurgence. West End residents enjoy the convenience of being strategically located near several prestigious institutions, embassies, fine dining restaurants, and five-star hotels, not to mention The Kennedy Center and George Washington University Hospital. Read on for our favorites in the glitzy West End neighborhood.

Work Out
There is no shortage of exercise options in West End. Whether you prefer a traditional gym atmosphere, high-intensity workouts, or a dance-inspired fitness regime, West End has it all.
Equinox
SoulCycle
Blast
Quantum Pilates
Pure Barre
CrossFit
Balance Gym
Squash on Fire